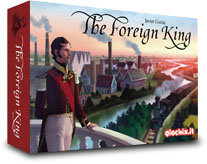 In the year 1831, the German prince Leopold I had a choice. Should he become the new king of Greece - or of the newly founded Belgium. He chose the newer nation, which had recently split from the Netherlands, and began to pursue an ambitious plan of industrialization.

In The Foreign King you'll assume a leading role in helping the new king shape this young nation. In this strategy game for two to four players players will compete with one another in the struggle for power and influence. 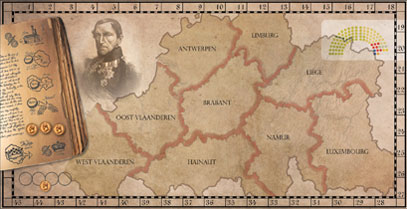 Our new game has some big shoes to fill. Compared to Romolo o Remo and Historia, this is a less complex game that is much easier to learn and play but still provides the players with difficult decisions. The Foreign King is a medium weight strategy game playable in around 40 minutes. 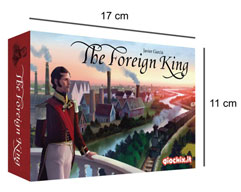 The Foreign King is a great strategy game, but one that can also serve as an entry point for more casual gamers looking to take that next step into the gaming world. One advantage is the pocket size aspect of the game (17cm x 11cm box), making it easy to take with you. The average play time is only 40 minutes, allowing multiple games to be played in a evening.

The goal of The Foreign King is to collect as many victory points as possible. This can happen in different ways. Each round, players choose an action in order to build factories and win majorities in each province. Since the king is from Germany and not from Belgium, he'll be traveling across the country to get to know his people better. 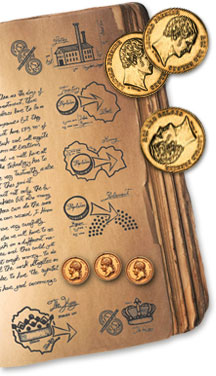 Victory points will be awarded based on the position of the king, the majorities in the provinces and the parliament, and the factories built. Whoever is able to demonstrate the best planning can even win the approval of the king.


With The Foreign King, we're looking to add a new format of game to our catalog. However, this portable format is new for us and all our calculations have been very conservative. We need your support to produce this language independent game with more expansions. The following stretch goals are also available once we've achieved our minimum funding. To reach the goals, the funding sum of other crowdfunding campaigns, which run simultaneously, will be combinded with Spieleschmiede:

Reached - 4.000 Euro: All supporters will receive the exclusive Railroads expansion.

Realizing that railways would be an important economic resource, king Leopold I ordered the construction of a national network. In 1835 the first railway was completed between Brussels and Mechelen. Within only a few years, Belgium possessed one of the most dense railway networks in the world. This expansion will allow the players to take on this challenge.

Reached - 8.000 Euro: All Deluxe Version supporters will receive the Riots expansion. This expansion will not be available later in stores.

In 1848, Leopold I helped to maintain peace and stop the spread of the European revolution into Belgium. This expansion requires players to manage riots in the provinces, and also use them for ruining the plans of their opponents.

Reached - 16.000 Euro: All supporters will receive the Catholics vs Liberals expansion.

The kingdom of Belgium was deeply divided. Part of the population was deeply religious: The Catholics were the backbone of the conservative movement. But the Liberals were gaining more and more support. They were more secular, living in the cities, and doing much to enable progress. With this expansion, the players can also take part in this political balancing act. 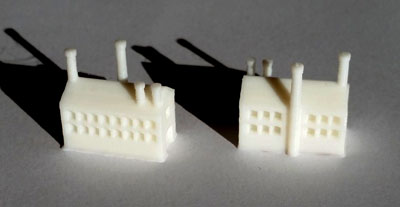 The Foreign King will have a special deluxe version. It will contain exclusive 3D miniatures, that are only produced for our Crowdfunding supporters. They will not be sold in the stores, after this project is finished. All supporters who choose this optional pack will receive the Riots expansion, if the matching stretch goal is met.

We are Giochix, an Italian publisher best known for our complex strategy games like Romolo o Remo and Historia. Since 2007 we've sold over 110,000 games worldwide, and also serve as an Italian distributor for many different games.

The designer of The Foreign King is Javier Garcia, who has previously developed and published a number of other well received games like Mecca, Belgium in 1831 and Zyrcan. Belgium 1831, a simpler print-and-play precursor to The Foreign King, reached a rating of 8.25 on Boardgamegeek.

Giochix has already published many titles, and specializes in civilization and strategy games. Their portfolio, including such titles as CO2 and Upon a Salty Ocean, as well as other crowdfunding projects (like Romolo o Remo), demonstrates their publishing experience.

The cost calculations for the project are, in our experience and assessment, realistic. The game is recommended for experienced gamers, and we believe a recommended age of 10 years and older to be appropriate. 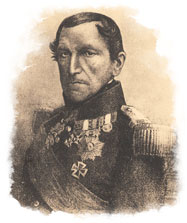 Our goal is to be able to deliver The Foreign King in September 2015. Spiele-Offensive.de will be responsible for the fulfillment. Supporters in Germany will receive everything shipped for free. For other countries see this postage cost table.

Please support The Foreign King by backing this project. You can also help us greatly by telling others about the project - whether by posting in your favorite forum, linking it from your website, or sharing it with your friends on Facebook, Twitter and Google+.

If you're excited about The Foreign King then use one of these avatars for your profile on your favorite social networks! Just right-click on the image and choose "Save Image As..." (the option may be slightly different depending on your browser). 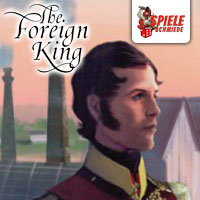 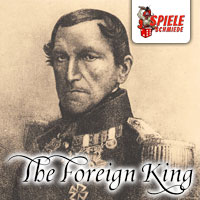 Reward no longer available50 24
EURO back the project with
24 € + Citizen
You'll receive one copy of The Foreign King.110 57
EURO back the project with
57 € + Patrician
You'll receive three copies of The Foreign King.13
Additionally, there are the following optional rewards available:
Here you can change or add something to your contribution:
Manage Contribution.