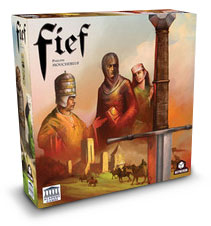 France in the late Middle Ages - a country torn apart by war and the ambitions of the feudal lords. Will you lead your noble family to the crown, or is it the title of Pope you desire? Only your strong hand can lead your family into a golden age!

Serious boardgame enthusiasts may already be familiar with Fief, the game having been originally released 23 years ago in France. At that time (1981) it won the Concours international de créateurs de jeux de société (international boardgame design competition). Unfortunately Fief was never released in German, but here at Academy Games we'd like to change that.

This Spieleschmiede project is to produce a German version of Fief - France 1429. The English version of the game has already been successfully financed on Kickstarter, surpassing it's funding goal by over 2000%. For English speaking backers, this means that you have one more opportunity to get Fief and all the amazing stretch goals unlocked during it's hugely successful campaign. Supporters here on Spieleschmiede will receive all of the stretch goals achieved in the Kickstarter project! Plus, US supporters will receive their rewards shipped for free along with the Kickstarter backers.

Fief is a game in which the player takes on the role of the head of a noble family. The goal is simple, expand your influence and create true dynasty! Whether you achieve your plans by the sword, by playing your opponents off one another at the negotiating table, by building alliances, or by using you influence to steer the church in the "right" direction is up to you. There are many ways to accomplish your goals and be the victor in the end.

Fief is designed for experienced gamers, but ambitious casual gamers will also enjoy the game. The rules are easy to learn, and quick-reference cards allow questions to be easily solved. Play time is around 30 minutes per player with as few as 3 players required, although play time can significantly increase at higher player counts due to the increased player interaction/negotiation.

How is Fief played?

Because Fief is a historical strategy game with a strong emphasis on diplomacy, combat, and alliances, the game flow is a little different than many other games. A turn is divided in to the following six phases: 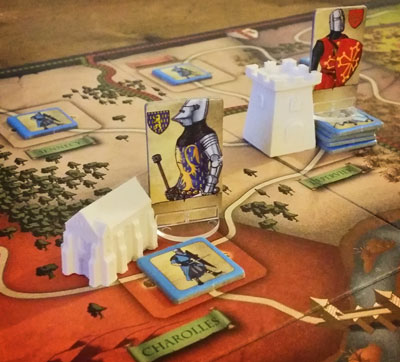 The first phase is for weddings and elections. Elections for Bishops, the Pope, or the King occur when the necessary prerequisites have been met. In the second phase character, event, and disaster cards are played. In the third phase the income from the cities, church and taxes will be calculated.

In the fourth phase your hard earned money can be spent on troops, city improvements, or titles. During the fifth phase your military units can be moved between the cities and fortifications. Phase six is for battle, using special Fief dice. Victory points will be acquired until one player (or two united through 'marriage') is declared the winner. 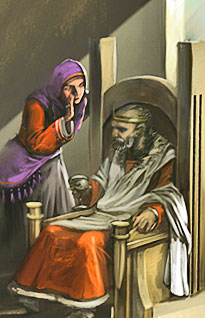 The goal of this project is to finance the German translation and distribution of the game. Unfortunately during the course of the Kickstarter campaign we lost our German partner. This is why we are unable to translate the rules in to German as originally planned, and need your help here at Spieleschmiede. Instead of releasing a separate German version, we plan to produce a completely bilingual (English/German) version. This way the Kickstarter backers will also be benefited by having the translated materials included in their games as well.

6.000 € - Funding Goal: Once this minimum funding goal is reached, supporters will receive every stretch reward unlocked during the Kickstarter campaign (detailed below). Additionally, you're helping your German speaking gaming friends to be able to play this great game in their own language. At this level just the base game will be translated into German. Additional stretch goals exist that will enable the translation of the 4 large expansions, but you'll be receiving English versions of these as well regardless of whether the stretch goals are met.

Just the base game of Fief - France 1429 includes extensive material allowing for many hours of enjoyment. In addition to the extra-large game board and 22 character cards, each game also includes 90 Men At Arms and 48 Knights. These together with the 12 castles and 8 cities will provide for many battles. The production of the game is already guaranteed thorough the already ended Kickstarter campaign. 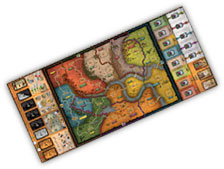 Expanded Game Board
In the original version of Fief there were three boards that had to be placed together. The expanded game board will bring together all the spots for the different cards onto one extra-large board. 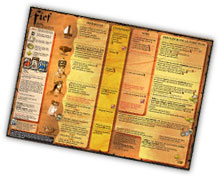 Quick Reference Guides
To help you get the answers you need at the moment you need them, every game will include six quick reference cards. These will make all the information you need available to you at a glance.

Noble Family Board
Each player will have a high-quality board to contain their character and attribute cards, as well as their achievements such as rank in the church, state or other faction.

Holy Relics
The Holy Relics are a small expansion for Fief. The relics give their owners not only power, but also special bonuses. There are a total of 5 different relics that can be won. 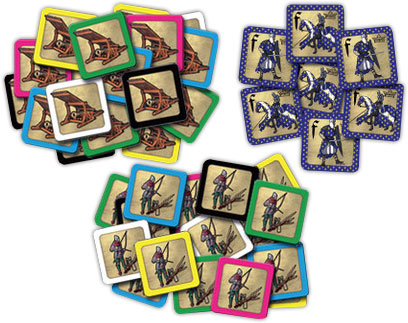 The Tactical Expansion will add four new unit types to the base game. The Bombards will increase your castle's or city's defensive capabilities. The Archers, however, are used to attack. Their arrows are a very real danger to the lords and knights. 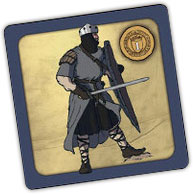 The Royal Guard is an elite group tasked with protecting the royal family. Often these loyal troops are the only thing standing between the assassins and family they protect. The Mercenaries are additional troops that can bid on by each player. A secret auction will take place in each turn. If no lord is ready to pay, then the mercenaries can also rebel and go marauding through the lands. 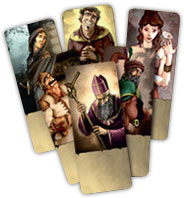 The Political Expansion adds two new elements to the game. The first is the Attendants. These alter the political process by providing a titled lord with a new way to achieve their objectives. The six attendants are Falconer, Minstrel, Apothecary, Astrologer, Bohemian, and Footpad. The second element is attribute cards for the characters. Every character receives a random attribute that can make their life either easier or more difficult. Is your character inspirational or cruel, beautiful or devious? 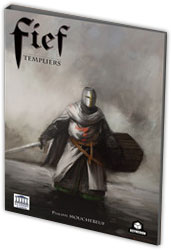 Thanks to the Templars Expansion, characters of nobility can now become Templars. This not only gives you the option of building the Commandery (Templar base) in your cities, but the election for Grand Templar will also give you the opportunity for a victory point. As opposed to mills, a Commandery provides more profit and is not dependent on weather or other circumstances. But this comes with a price! Because together with the crusaders, the Templars will have to leave for the Middle-East to fight in the crusades. 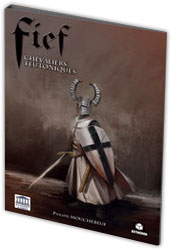 Similar to the Templar Expansion, this expansion allows a character at a certain point to join the Teutonic Knights. But instead of receiving more income, this path is more militaristic in nature. You can defend your cities with Strongholds and move between them quickly thanks to their famous tunnel system. Additionally your character can participate in the election for the Grand Master of the Teutonic Knights, which means another victory point.

The Crusader Expansion provides another way to conquer the lands of your opponents. Simply convert the unbelievers! Be careful, however, that the rival lords don't force you into a crusade. If that happens, you and the other players will have to undertake an expedition to the eastern lands where you will face the mighty armies of Saladin. Although the Templars and Teutonic Knights will be required to help you.

The Crusader Expansion for Fief includes the four crusader states in the Middle East. These crusader states are the Kingdom of Jerusalem, the Principality of Antioch, and the Counties of Edessa and Tripoli. These lands can be conquered in addition to the French fiefs. In 1429 these crusader states were actually in the hands of the Muslims, but perhaps an army under your command can change the course of history? 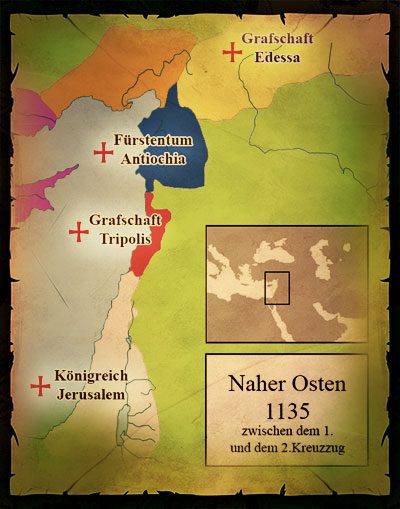 In addition to the base game and expansions, you can upgrade your copy of Fief with these add ons. In addition to a medieval metal coin set, you can also get 3D solid plastic models of the cities, mills, strongholds, and Templar faction buildings.

3D Building Models
With this option you'll receive 45 plastic models of the building in Fief. In addition to 12 strongholds, 3 fortified cities and 15 mills you'll also get 5 Templar Commanderies and Teutonic Knight Strongholds. These building are not just hollow plastic models, but solid miniatures.

Medieval Metal Coin Set
In collaboration with Conquistator Games we're offering a custom medieval coin set. The coins will be made from metal and give your game of Fief a deeper sense of history and realism. Each set will contain 51 coins, 20 bronze, 15 silver, 10 gold, 5 bright silver, and 1 extra-large bright gold. The size of the coins ranges from 15 to 35 millimeters and depict various historical figures from French history.

We are Academy Games, an American company made up of game enthusiasts that specializes in historical boardgames. Each of our products is characterized by attention to detail and intuitive rules. This allows for both maximum fun and tactical depth. Many of our games, for example our Conflict of Heroes series, have been honored with awards and we hope to continue this success with our future products.

Although our focus has previously been on the two world wars and the American civil war, we would like to take our first step into European history with Fief  France 1429. This project is the first game that we've worked on together with our French partner Asyncron Games.

Academy Games has previously published many games, and has been very successful with their tactical wargames in the USA. Their portfolio includes 14 professionally produced games, including many award winners such as Price of Honor (2011 International Game Award), Storms of Steel or Awakening the Bear (2010 and 2009 Origins Historical Board Game of the Year). The original version of Fief - France 1429 won the French game award Concours international de créateurs de jeux de société in 1981.

The cost calculations for the project are, in our experience and assessment, realistic. The game is recommended for experienced gamers due to it's complex mechanics and high replayability. We believe a recommended age of 12 years and older to be appropriate.

Our goal is to be able to deliver Fief - France 1429 by the end of July. Spiele-Offensive.de will handle the delivery of the rewards. Backers in Germany and the USA will receive everything shipped for free. For other countries see this postage cost table.

Please support Fief - France 1429 by backing this project. You can also help us greatly by telling others about the project - whether by posting in your favorite forum, linking it from your website, or sharing it with your friends on Facebook, Twitter and Google+.

If you're excited about Fief - France 1429 then use one of these avatars for your profile on your favorite social networks! Just right-click on the image and choose "Save Image As..." (the option may be slightly different depending on your browser). 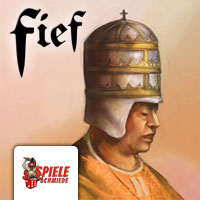 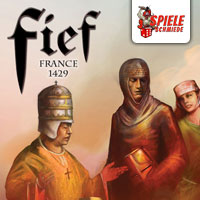 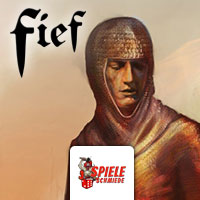 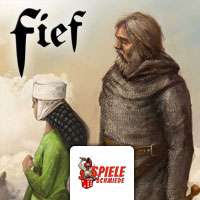 Pictures of the game and packaging represent the current state of development, and may still be subject to change.