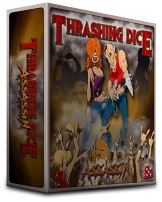 Take on the role of an aspiring metal band setting out to win over the minds and ears of metal fans everywhere! Train your band members, play concerts, compete for fans, release albums and dominate the metal charts! Perform the best at the "Thrash Awards" ceremony at the end of the game and claim the metal throne!

How do you claim the metal throne?

You have a long way to go before you'll be playing in front of thousands of screaming fans, singing along with your music! First, you'll have to assemble your band! Choose one of the real six metal bands included in the game (and that we'll introduce below). Take the lead and prove your skills as a band manager by making the right decisions at the right time! 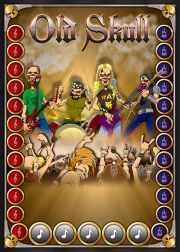 Once you've chosen your band, you can begin your journey either alone (in the solo variant) or with up to four other bands. You'll leave the darkness of the rehearsal room and emerge on the brightly lit stage of the cutthroat music business. Each turn you'll have hard decisions to make, because your time and resources are limited.

Each round you have the opportunity to go to one or more of the eight available locations on the board. For example: the guitar shop, the Rock Academy, the Metalhead Club, the radio station or the recording studio. You'll have to choose wisely: Do you start with playing a club concert to increase get your name out there? Or maybe better to rehearse a little more for the big concert on the weekend? Or is it time to finally upgrade your instrument? Your lead singers microphone is starting to sound more like a CB radio, you need new drums, and the other bands have already upgraded ... so the guitar shop it is! 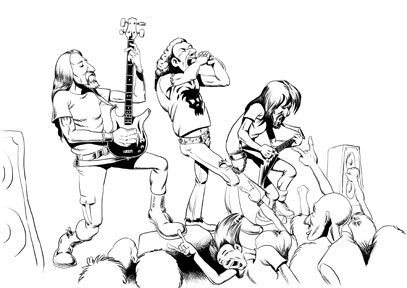 Depending on the location, performing an action there will cost you from one to five dice. But it's not quite that simple: your dice will need to be either of the same value or in ascending order:

Bad dice luck? No problem! You know people! Use the Character Cards to make things work for you. With the help of their special skills you'll gain benefits in every aspect of the game. Isn't "Screw", your Roadie, super networked? Doesn't "Wall", the bouncer from Venom, still owe you a favor? And you can always trust Billy at the radio station with the recording from your last live show ... 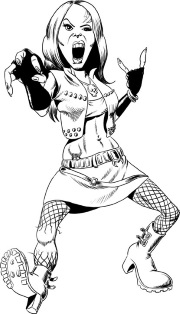 During the game's six to eight rounds you'll rehearse till you drop, play concert after concert, and build your fan-base. You'll record albums in the studio, give interviews at the radio station, and fight hard to reach the top of the metal charts. And at the final concert at the end of the game you'll give everything you've got! Afterwards, in front of a packed house, the highly coveted "Thrash Awards" will be given out. Who's produced the best album? Who has the best individual artist? And for the finale: Which band has achieved the greatest fame and will claim the metal throne? One thing is certain: The throne is only big enough for one!

You can read the existing English rules here.

What's in the box?

The new Assassin Edition contains a number of improvements over the previous version:

Instead of the previous one-sided game board, the completely redesigned Assassin board will now be two-sided and allow Thrashing Dice to be played either solo or with up to five players. The number of cards in the scandal deck and number of dice included has also increased. Completely new to this edition are the Event Cards, which add even more excitement and variety to the game. This new edition will also contain a lot of new art to go along with the new bands and revised rules. 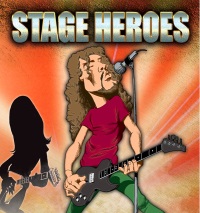 The "Stage Heroes" expansion is available as either an add-on option or as part of the Headliner level. The expansion adds special abilities to your bands. Each band begins with one of the eight randomly selected abilities and can use it during the game. 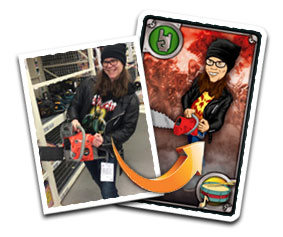 Would you like to appear in the game yourself? Then choose the "Fan Portrait" add-on or "Rock Legend" support level. A Fan card in the game will be based on your photo.

New to this edition are some real metal bands which will be represented in the game both on the player boards and on the included music CD. All these bands are real! You can see them here:

The following videos show reviews of the first edition of Thrashing Dice which was called Trash'n Roll. But they should also be great for giving you an idea of the new edition! 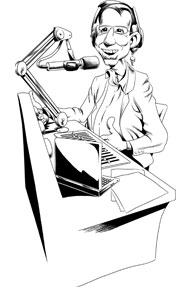 Together with Spieleschmiede, we want to release the Assassin Edition of Thrashing Dice. In addition to the headliners, the veteran thrash band Assassin, other newer bands will also be represented in the game and on the accompanying music CD. We also want to revise the rulebook from the first version to improve it and add the game's new aspects, while the remaining components are language-neutral.

Who is behind Thrashing Dice

We are Tailor Games, a young publisher from Wadowice, Poland. (We were previously known as Game Fabrica, but the new name works better internationally.) Our last game Cargo Train, appreciated by fans as a short but deep game, shows the direction we want to go further in the future: to develop games that make you think! With our board and card games we want to give players tactical challenges, but also plenty of fun with friends.

Tailor Games is a young, enthusiastic publisher that you know already by the name Game Fabrica on Spieleschmeide (Cargo Train was successfully funded). You can tell that Thrashing Dice designers Krzysztof Matusik and Aleksander Biela are experienced gamers who put their hearts and (metal) heads into their game.

The theme of metal bands and the music business is implemented well (with humor) in Thrashing Dice - Assassin Edition, both graphically and mechanically. Despite the use of dice, the luck factor is kept within limits by the skillful use of cards to allow even seemingly poor dice results to be used well. We recommend the game for 1 - 5 experienced players age 12 and up.

The cost calculations for the project are, in our experience and assessment, realistic. 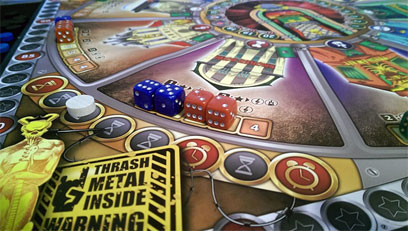 Our goal is to be able to deliver Thrashing Dice - Assassin Edition in November 2016. Spiele-Offensive.de will handle the delivery of the rewards. Backers in Germany will receive everything shipped for free. For other countries see this postage cost table.

Out of the rehearsal room, and on to the stage!

Tonight a small concert for just a few fans, but by next month you'll be playing for screaming crowds! Be there and help write metal history!

Please support Thrashing Dice - Assassin Edition by backing this project. You can also help us greatly by telling others about the project - whether by posting in your favorite forum, linking it from your website, or sharing it with your friends on Facebook, Twitter and Google+. There are many ways you can help contribute to the game's success.

If you're excited about Thrashing Dice - Assassin Edition then use one of these avatars for your profile on your favorite social networks! Just right-click on the image and choose "Save Image As..." (the option may be slightly different depending on your browser). 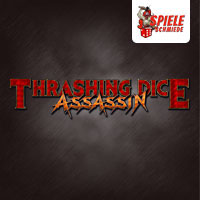 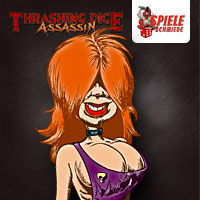 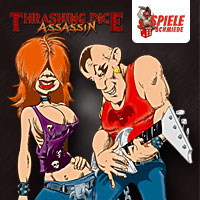 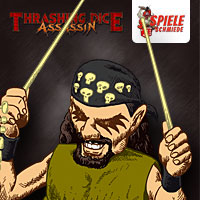 Support Thrashing Dice - Assassin Edition now, and help us make this game a reality! Be one of the first to secure your copy!!!

Only 6 left!9
Additionally, there are the following optional rewards available:
Here you can change or add something to your contribution:
Manage Contribution.