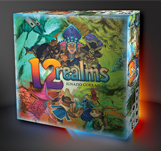 This project is about the German localisation of 12 Realms. But you may also benefit, if you do not speak German. Please read below for details! 12 Realms was nominated by boardgamegeeks to be one of the best print and play games 2011. It is a cooperative boardgame that can also be played solo. Thanks to its fantastic materials, its fairytail graphics and its theme it will be perfect for families but will also convince expierienced players.

Ignazi Corrao invented 12 Realms. Since about 3 years he works on his first game now. Many boardgamegeek users liked it alot and nominated it to be one of the best print and play boardgames on BGG in 2011. So Mage company, an innovative boardgamepublisher from Bulgaria, decided to publish it. Boardgamers know this company for games like Eragra and Wrong Chemistry.

What is 12 Realms about?

The Realms are threatened by the Dark Lords. The players are the Heroes of the realms like Jeanne D´Arc , Robin Hood, D´Artagnan or Siegfried. Together they use their talents and mighty artifacts to face the Dark Lords and defeat them. Every Realm has its unique creatures, challenges and treasures. The game contains 4 Realms.

For casual and sophisticated boardgamers

The basic version of the game plays lighthearted and is easy to learn. A good game for families. But it also contains additional mods, that can be combined with it like event cards, town cards and also the possibility to play the Dark Lords yourself. All this makes the game suitable for sophisticated gamers. Up to 6 players play the game together and it is even possible to play it alone. 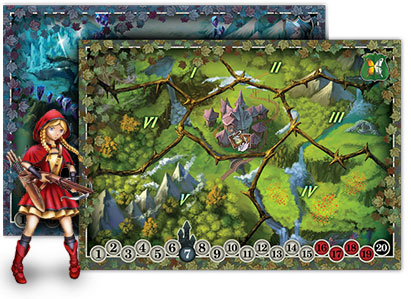 The game shall be produced in a German bilingual version

12 Realms is already financed via kickstarter, so it will be produced in English. This project was launched to make sure, it will be a bilingual version German and English. Most of the material is language neutral (only names or no text with effect), but event cards and the rules are not. These will be translated.

I do not speak German, why should I contribute, too?

The game will be bilingual in English and German. But shipping will be done from Germany within Europe. So for most european Smithies it will be more cost effective to contribute in the Spieleschmiede project, than it would be on kickstarter.

How 12 Realms was created 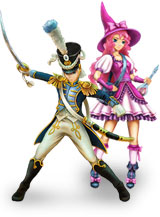 The Italian author Ignazio Corrao usually makes computer and console games. Since about 3 years he is working on 12 Realms now. His aim was, to create a game, that consists of everything he likes most about boardgaming. He combined his game concept with the themes he loves: classic fairytails, russian balett and even european history.

The unique fairytail art and design of the game and also the detailed miniatures make 12 Realms an optical highlight. 12 Miniatures are part of the basic version of the game and thanks to the great illustrations of the very many cards, tokens and realms, you will always know, what belongs together. It is very easy to become a part of this fairytale world. 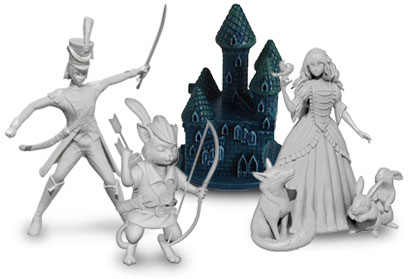 These are the extras for Smithies

Some of the rewards you can choose will never be available in retail.
The digital art book contains many of the cute grafics and illustrations of the game.
The 2 magical rings are spinner rings, that can be used instead of the dice. Just spin the outer rings.
And depending on the reward you choose you can get an additional, handpainted miniature of Jeanne d´Arc or even a full set of handpainted miniatures.
The towncards in the game are exclusice to contributors in the funding projects and will never be available in retail.
The Crab is an additional, neutral creature miniature exclusively available for backers. You will know on whos site it is, when you play the game.
The 12 extra Invader cards add more creatures to the realm decks. There are 3 extra creatures for every Realm. They can be added with the additional options.
You may choose to add more dice (6 dice are in the set, 3 of each kind), to give every player his own set.
Extra building minis of the inn, stable and bazar are for the collectors. They are already in the game, but if you would like to paint some or have some else for your miniature collection, you can add this option. 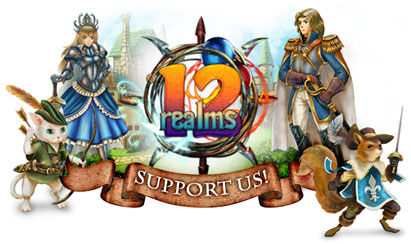 The games will be delivered as soon as they are produced. Our aim is to be done with production until the end of September. For shipping to adresses within Germany there are no additional shipping fees.

The game will be produced in a English and German bilingual version.

These are the stretch goals to make the game even better, if the funding exceeds 10.000€

12 Realms will be even better for all smithies, if we manage to exceed 10.000€ funding.

New: Because of the combination of Spieleschmiede and kickstarter to fund 12 Realms, the stretchgoals have been recalculated. Here are the new ones:

14.000 € we produce a video explaining the rules of the game (We are sorry, this will be German only)

20.000 € 2 additional miniatures will be added: The Dark Lords Snow Queen and Mouse king.

21.000 € 2 additional miniatures will be added: The Dark Lords Tamano No Mae and Bakeneko.
(this goal was met on kickstarter. So we moved it to 11.000 € to show that it is already reached.)

22.000 € 2 additional miniatures will be added: The Dark Lords Jack Ruckum and Titania. (this goal was met on kickstarter. So we moved it to 11.000 € to show that it is already reached.)

23.000 € 2 additional miniatures will be added: The Dark Lords Pirate King and Von Rathbart.

35.000 € 12 Realms will be produced in a full German version. Also the names on the cards with no text with effects will be translated. If we reach this goal, we will ask you, which version you prefer (english or German) and send you this.

Important hint: this project is running parallel to the one on kickstarter. Each stretch goal met here, will be available for all corresponding kickstarters as well, also if kickstarter exceeds a new stretch goal, Spieleschmeide smithies will get its rewards will, too.

The production date for 12 Realms is already set. It is only possible to make a multilingual version at a reasonable, if we can combine it to the production of the english one. So we need to hurry, since production starts in February. Because of the detailed miniatures, Mage company expects a production time of about 6-7 months. We count on your help as a Smithy for this really nice game. Please do also tell your friends about it and support 12 Realms now.

With your support your can ensure your game of 12 Realms and the special game material for contributors.

3 extra miniatures: The inn, the stables and the bazaar.

we will produce a video explaining the rules of 12 Realms. (German only)

2 additional miniatures: The Dark Lords Tamano No Mae and Bakeneko.

A complete German version will be procuded. Also the names on cards and boards will be translated in this all new German material. (English speaking Smithies will receive an English version upon request)