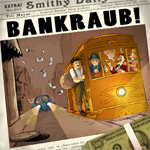 Welcome to the Spieleschmiede (Game Forge) of "Bankraub" (bank robbery). Help us to finance the start of Bankraub. Therefore, we need startup financing with the help of your support. Bankraub combines competitive and cooperative game elements in one game where the player plans and arranges bank robberies or prevent one as a team. With your help of support the coup can start and this unique game will become reality. As a Smithy, supporting the game, you will get exclusive rewards.

Till Meyer is the inventor of Bankraub. He is a member of the developer team Spieltrieb, who published more than 50 games. Spieltrieb is usually making contracting works, like games for promotion but also for educational purposes. Their hobby, boardgames, have become their profession.

This is how Bankraub works

 Bankraub is a succesful mixture of strategy and tactic with an additional trouble mechanism. Just great! So, this is the continuous positive result of Spielernetzwerker which have tested the prototype of Bankraub at the exhibition Modell Hobby Spiel in Leipzig.

In Bankraub the players are criminals; they are planning the big coup: the bank robbery. It is difficult to launch such a big project alone. Therefore, each player is assembling a team of professional criminals of different gangs and plans the escape after robbery  but only in hidden action. (At the end every gang wants to get a part of the loot; that makes the plan not easier.) As soon as a player is ready, he shouts bank robbery and starts the robbery. If he is successful, he tries to escape. The other players become role models of responsibility  now hunting the robber. If he is captured, they get an incentive payment, or the captor grabs the loot and tries to seek shelter. The winner is the player with the highest amount of money.

The inventor and the history of Bankraub

The people behind Spieltrieb are passionated players, inventing complex strategic games, too. They are a pleasure for gamers who are playing a lot, but it is not suitable for promotion at all  the main business of the company. So they have released some of them in their private publishing house, for example, the very good but rarely known games Eynsteyn and Jets.

Spieltrieb put all their heart into the work of Bankraub.

Till Meyer has already invented Bankraub during his study. The game was an alpha-version of his thesis in 1986. Since then, the game has been consistently improved and has now achieved a point where a lot of detailed work was made to improve the games mechanisms and balance. Now it deserves a huge public audience.

Spieltrieb is a classic publisher and has no general distribution to launch games on their own way to the market. Earlier attempts of the inventor team has shown that they are better inventing games than selling games. It is understandable that they cannot finance further as a private publishing house without having a big financial risk. With your support we could finance the game Bankraub and finally produce it.

Bankraub will be launched in a limited and numbered collector´s edition. It is planned to produce anly 1.000 copies worldwide. If we need to produce more copies because of this Spieleschmiede project, we will produce only so much as we need for all the smithies. If there are future printruns for Bankraub, they will differ from the version of the first print run. This will always stay unique. But all future versions of Bankraub will feature the names of the Crooks in this project in their rulesheets as sponsors.

These are the stages of rewards of the exclusive expansions:

If you support the game Bankraub, you will receive exclusive bonus material which will never be available after market launch:

Every game receives an exclusive Spielernetzwerk-tram card  an escape vehicle  which can be used instead of the usual tram.

Sewer rat: If you choose a stage of reward with it, you can also get the sewer expansion. This is an additional way of escape that makes it easier to hunker down the loot. The expension consists of additional gamecards that can be used for planning the escape plan. That is making the game even more exciting.

The Croesus Gang is another selectable expansion of the game. Croesus is a gang of rich snobs. They only rob banks for fun and thrill  they are not interested in the loot. They exist of a whole card deck, another gang and lead to a new dynamic in the game. 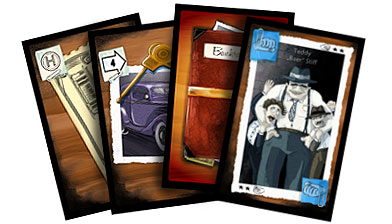 You are the robber. Cool gangsters need gangster cards for a bank robbery. You can be one of them. Choose this step of reward and send us your photo to become a part of the game (as a caricature).

Designer Christian Opperer will create the grafics for Bankraub. Of course the setting is at nighttimes. Here you can see a part of the playboard: By the way: The grafic arts that you can see in the video, are only prototypes. The designer Christian Opperer will illustrate Bankraub in style of the drafts which you can already see to give the game the typical charming and funny note of gangsters. This will fit perfectly. At the moment the drafts are only sketches, the finished game will be coloured.

Choose a number: Bankraub will be limited and numbered. Obly 1000 copies will be produced. If you want a special number and if you are fast enough, you can reserve it. To o so, please just contribute the amount with the reward you want. Then send a personal message to Till Meyer via the Spielernetzwerk and tell him the number you want. He will tell you ok, if it is and post it on the special thread in the forums. Then make a new contribution at the 5 level (Do not upgrade your current contribution) and we will reserve the number for you. Because of logistic issues only the first 25 smithies will be served.

In addition, all game forgers who are members of Spielernetzwerk of Spiele-offensive.de, will receive the exclusive Bankraub medal for their profile..

The games will be delivered as soon as they are produced. Our aim is to be done with production until the middle of february. For shipping to adresses within Germany there are no additional shipping fees.

The game will be produced with German and English rules, the material is language neutral, it does not contain game relevant texts, only names, and can be used without German language knowledge.

If the minimum necessary amount of 18,000  is funded, the offer gets even better:

at 22,000  we produce a video explaining the rules of the game (We are sorry, this will be German only)
at 23,500  the game board will be more variable and modular.
at 26,000  every copy of the game will receive the burglary expansion. It allows to acquire additional equipment during the escape when running through houses.
at 36,000  real play money will be printed for every game. So it will be more realistic.
at 50,000  the material will be improved. Instead of wooden dice in the safes, watchmen and alarm systems, premium parts of wood will be used in the game.

If you want to, you may download and read the rules here. (English undesigned version).

The funding is only possible until 16th of december to make sure the game will be produced. The time is short so we count on your support, no matter if you fund the project yourself or by telling your friends about it.

With your support your can ensure your game Bankraub and the exclusive game material for Smithies.

instead of a static playboard there will be modules that can be combined to create a new playboard for each new game of Bankraub. No 2 rounds will be the same.

enables to steal something useful while fleeing through houses.

real play money will be printed instead of the need to write the score down.

Instead of wooden dice for the safes, watchmen and alarm systems, premium parts of wood will be used in the game.